Kelvin Sampson and son Kellen are photographed at the Fertitta Center, one example of Kelvin’s push for great new facilities. At his behest, the Cougars also built a $ 25 million training center, which Kelvin calls a ‘Taj Mahal.’

Since Kelvin Sampson’s arrival at UH in 2014, the Cougars have risen meteorically to become the NCAA’s third-winningest team of the last five years, claiming four conference championships and, in 2021, making a Final Four appearance. “When I first got here, everyone knew there was one place you never took new recruits: the arena where they’d play their games,” says Sampson, 66. “That’s blasphemy.” He credits the success to others – like Tilman Fertitta, for whom the school’s new arena is named – who bought into his vision that UH could become a winning team by building state-of-the-art facilities. “It’s been an evolution. There’s a lot of schools that have a great basketball team, but we have a great one program. ”

Kellen Sampson spent his childhood idolizing his father Kelvin, hoping to work with him. Now he’s the UH basketball team’s assistant coach and designated future head coach – a dream come true. In the father-son duo, the Cougars have something no other NCAA program does. “The secret sauce is our continuity,” Kellen says. “There’s a wholesomeness to when Coach and I walk into a young person’s home; we can honestly say that we will both be here for your son. Ideas … and discussions that were tossed around in recruitment, we’re able to manifest them. ” He’s also manifesting things for his own two kids: “They think their Papa K is some combo of Santa, Super Man and Batman, the same things I thought about my father.” 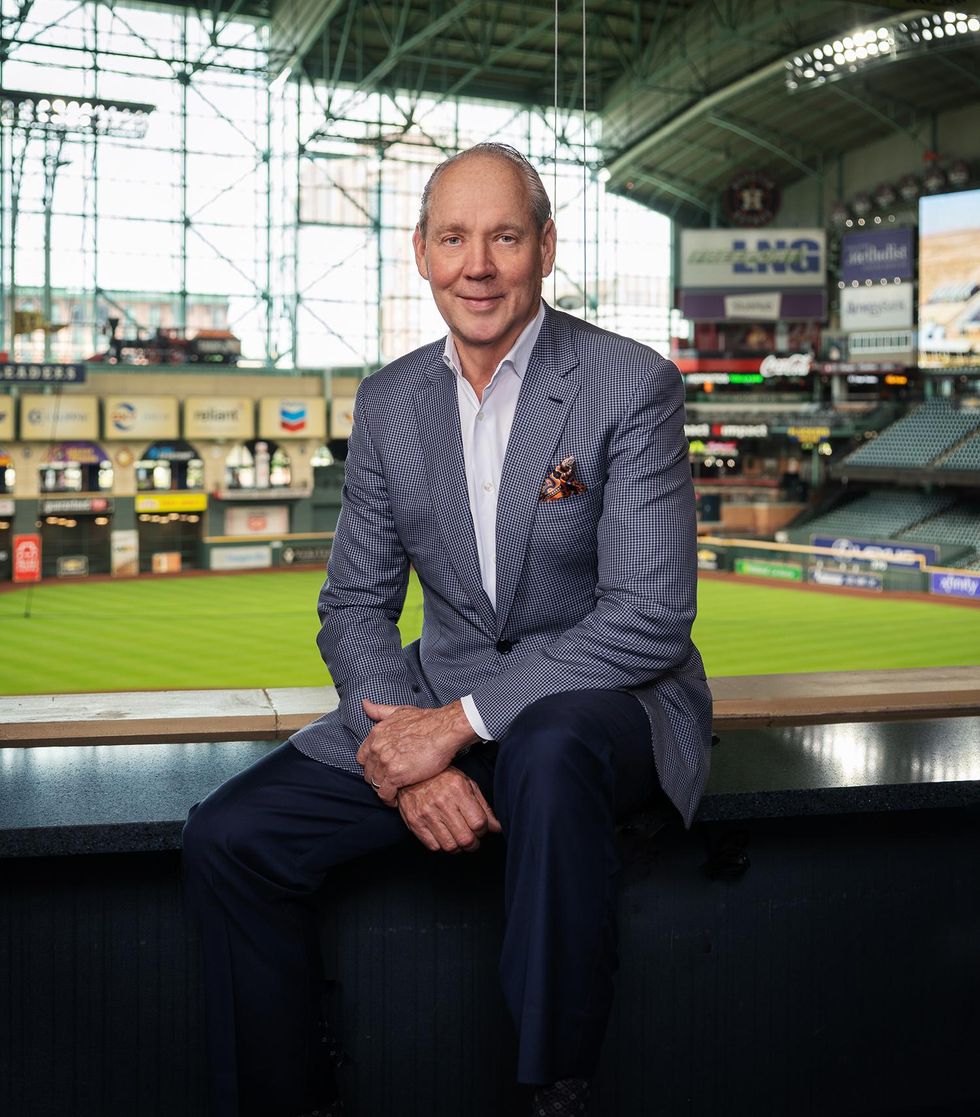 Jim Crane, a self-made shipping magnate, is a big-picture thinker. He purchased the Astros in 2011 and led the team to multiple playoff appearances and a World Series win. And while the value of the team has quadrupled since his acquisition, per Forbes, Crane isn’t solely focused on the money-making. “We’ve appeared in five consecutive American League Championships. If we make it to six this year, it’ll be a new record, ”Brags Crane, 68, who also grew the Astros Foundation from $ 50,000 to a multimillion-dollar endowment. (He used the Foundation’s new clout to take over the Houston Open golf tournament in 2018, to ensure it stayed in the city.) What’s his end game? “To support our community for generations to come.” 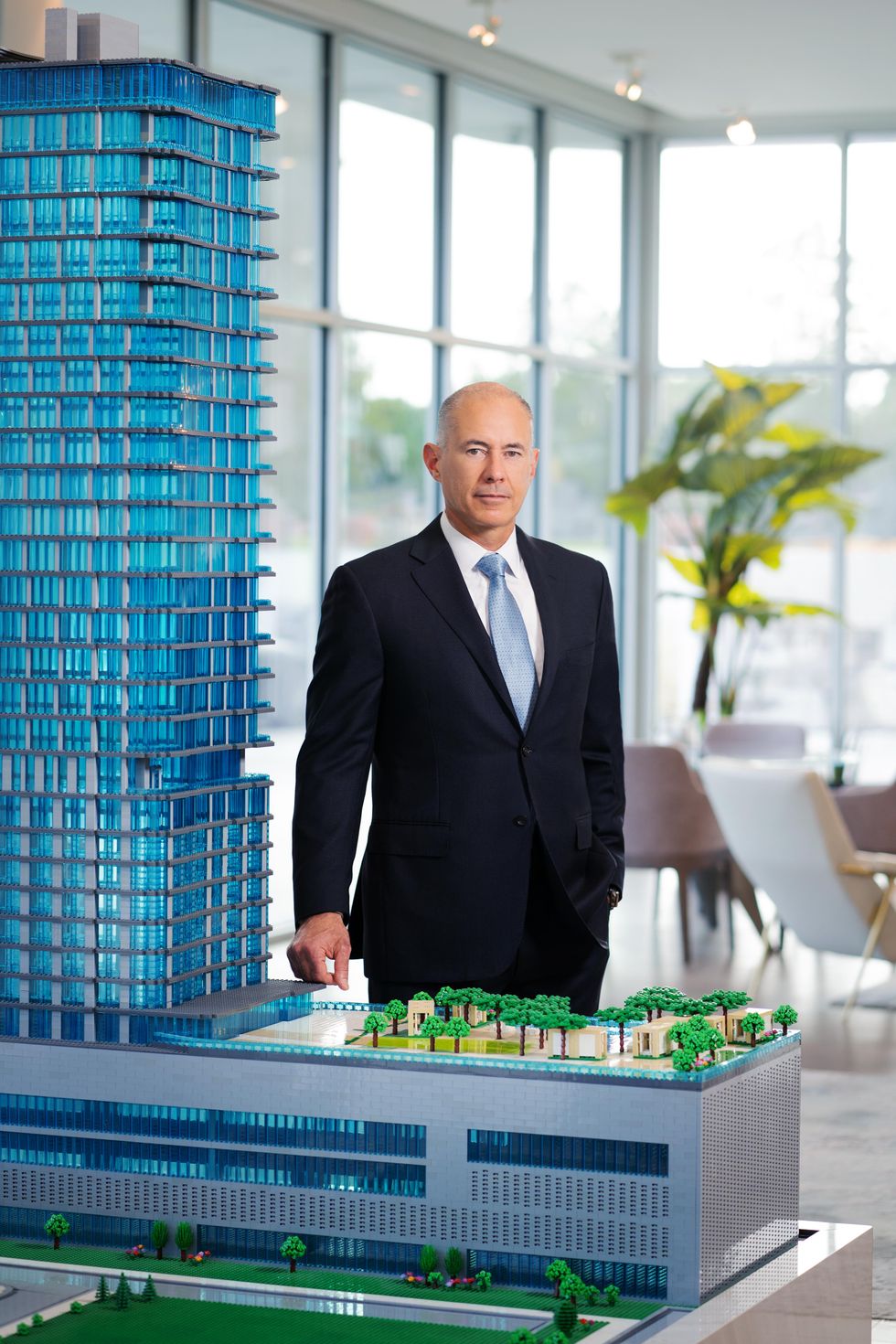 Contreras at the condo sales office for The Allen, which will also be home to a stunning new Thompson hotel, a first for Houston

Mexico City-raised Roberto Contreras is a passionate and gracious entrepreneur, who informs his work as CEO of St. Christopher Holdings. Its subsidiaries include Moderno Porcelain Works – the latest in a long list of stone and surfacing companies established by Contreras, who started his first one as a young UH city – and luxury real estate development firm DC Partners. The latter is behind the Astoria and Arabella high-rise towers, and the truly revolutionary new mixed-use complex The Allen, rising up near Buffalo Bayou Park. “It’s our largest project to date,” says Contreras, 58. His aim is not only to “redefine urban living,” but also to demonstrate to his seven grandkids “that there is an opportunity for them.” 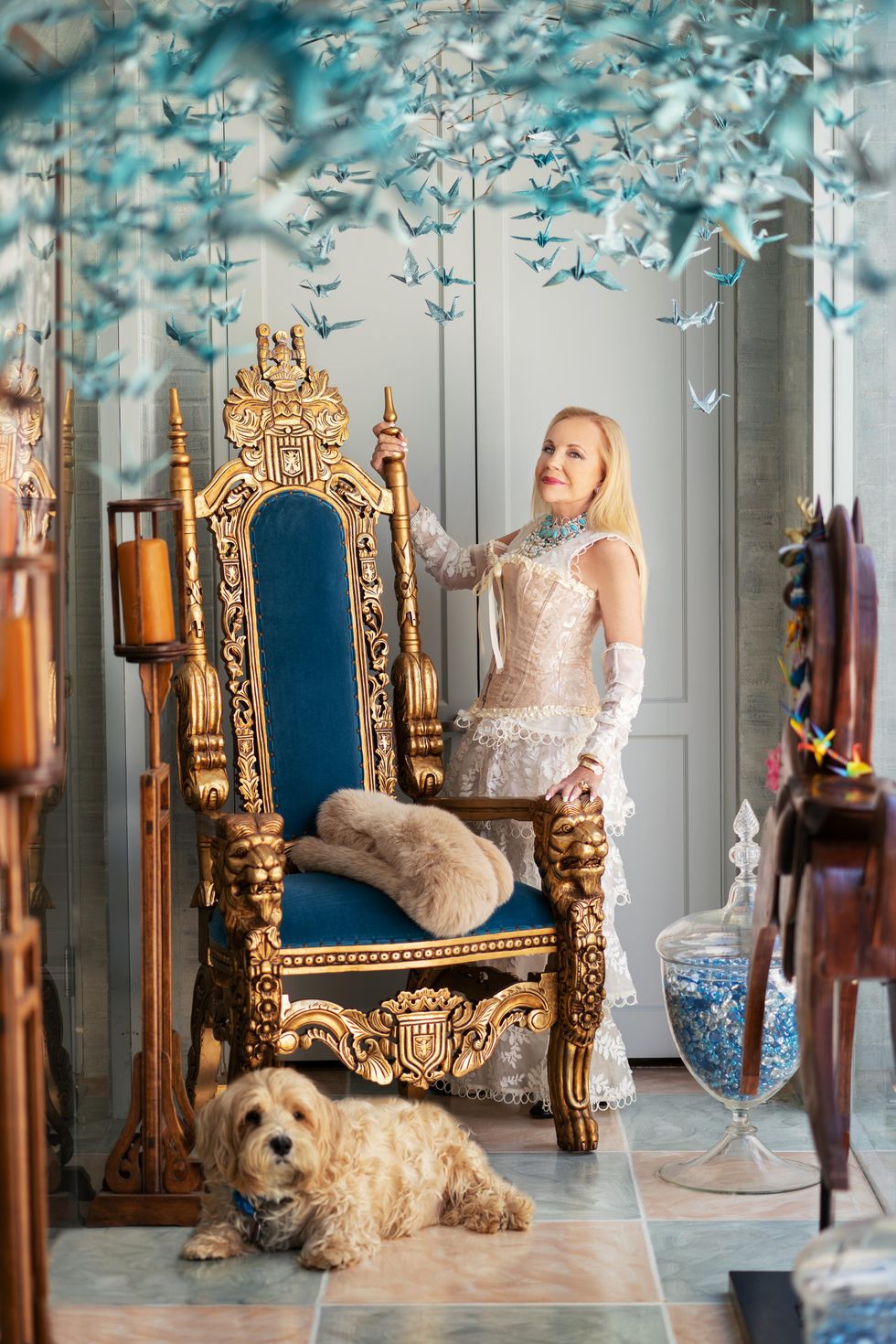 Carolyn Farb wrote the book on fundraising. (Actually, she wrote two. And another one, Gracious Beauty: The Purposeful Life of Carolyn Farb, is forthcoming.) “Houston is a giving city,” says Farb, “where people care if there is a new opera house, a new library, new playgrounds, including ones for children with disabilities.” For causes as diverse as those, Farb estimates she’s raised more than $ 250 million and, despite the setbacks presented by the pandemic, she continues to be generous with her energy. “I enjoy bringing joy to those who are less fortunate,” says the consummate hostess who became widely known for her fab fetes in the ’80s. These days, she’s going to bat for causes like Virtuosi, the Ballet and children’s charities. “I’m proud to live in Texas, a state with a big heart.” 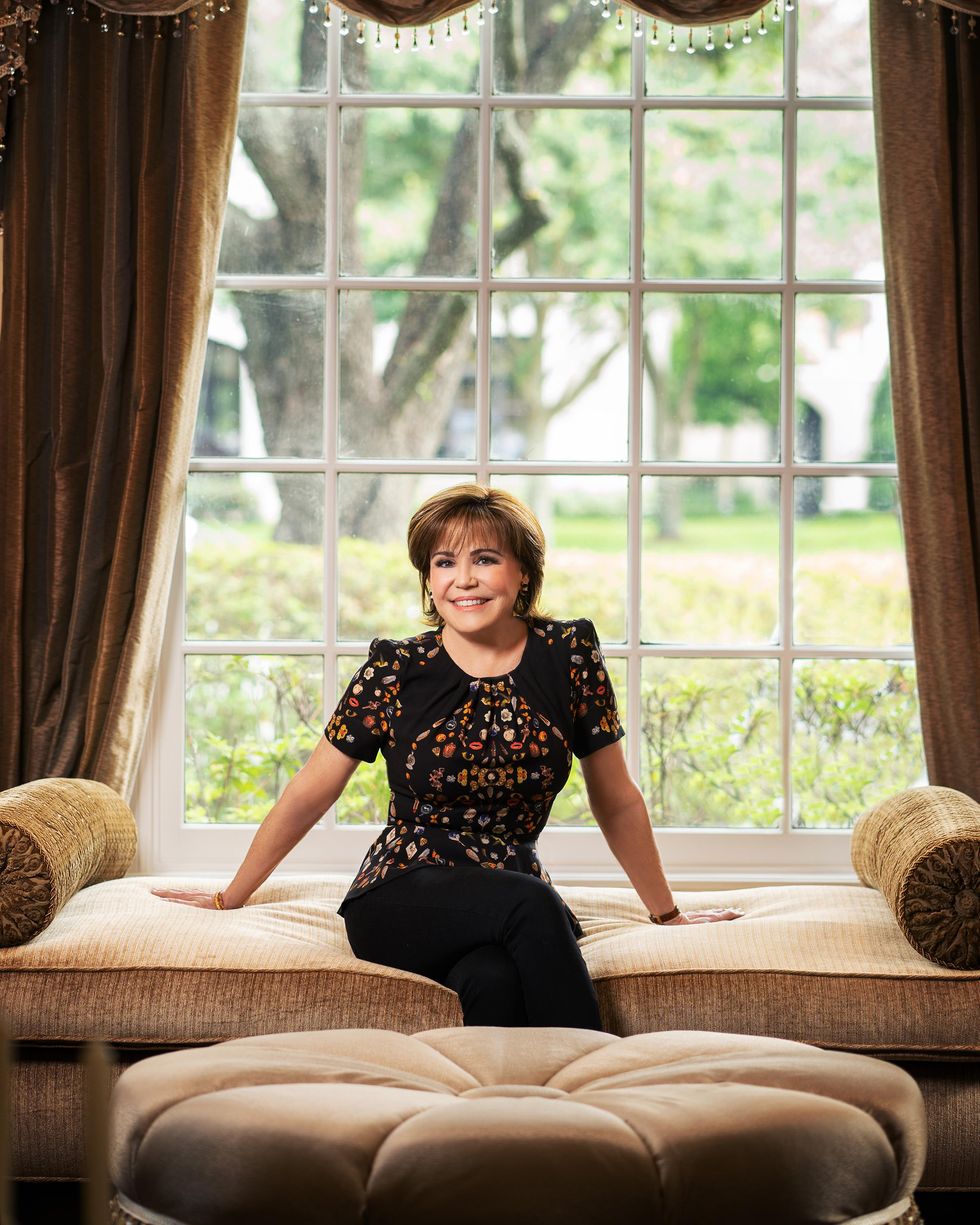 After two years of smaller and virtual events, Houston is ready to party – for a cause. Nobody knows this better than society doyenne Hallie Vanderhider, who’s behind some of this year’s biggest bashes, like the springtime Evening in the Park fundraiser for Hermann Park, and fall’s 40th anniversary Best Dressed luncheon hosted by the Chronicle. While event-planning efforts and seemingly omnipresent society circulating could well be a full-time job, Vanderhider, 64, also boasts a successful oil and gas career. Her work ethic – “instilled in me by my father” – benefits many, but the Houston Ballet is special. “It’s pivoted so successfully in the face of disasters,” she says, “continuing to provide inspiring art for the community even under the most trying of circumstances.” 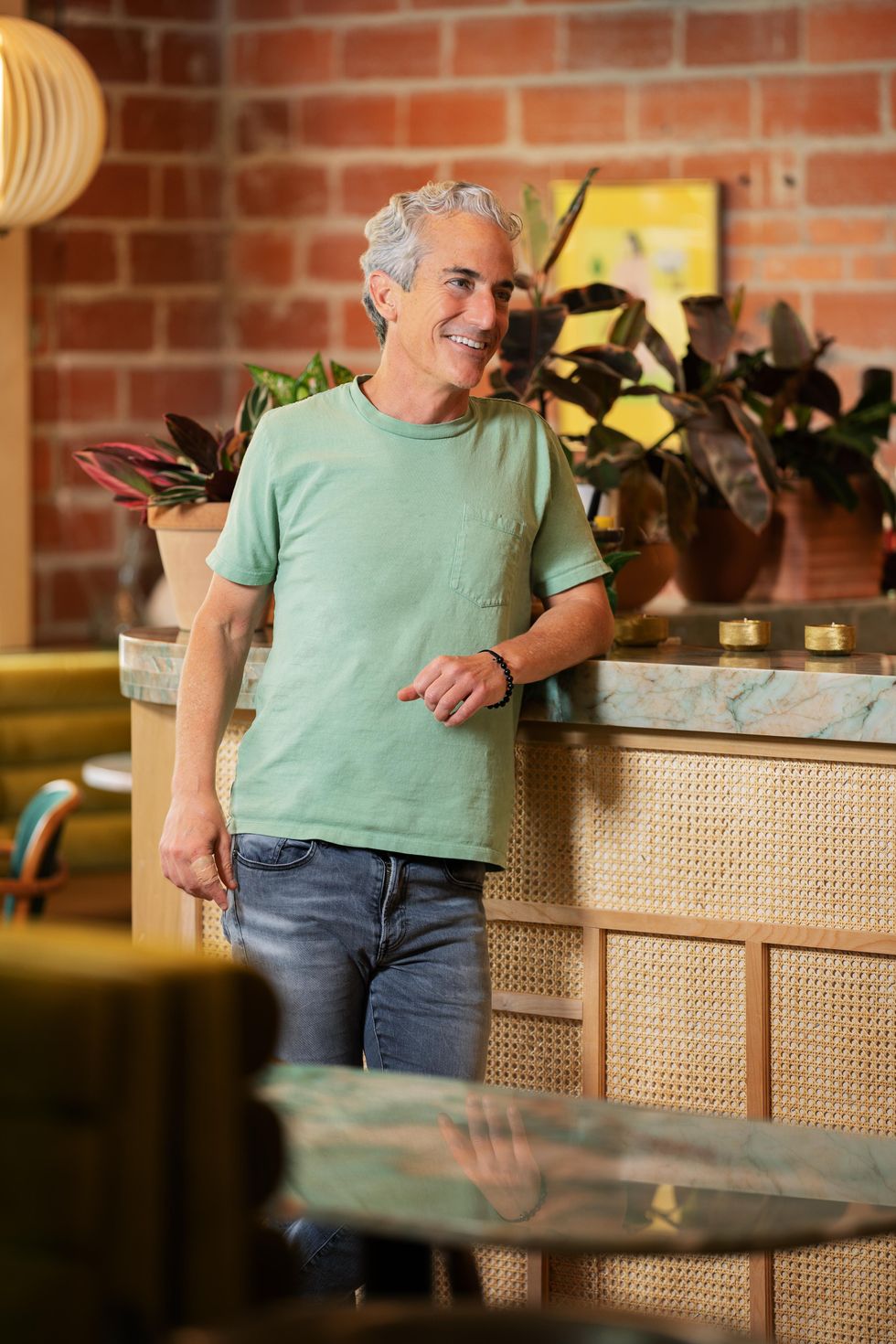 Levit at Lees Den, upstairs from the original Benjy’s, now a Local Foods, not far from where he lives with his wife and two kids in West U

For a quarter century, Benjy Levit’s eponymous restaurant in Rice Village was a sceney spot for brunch all the way through to dessert – his mom’s chocolate cake, of course. In 2011, Levit, now 53, opened a next-door sandwich spot simply named Local Foods, which quickly garnered something of a cult following. A pandemic pivot meant that Levit would expand the hugely popular Local Foods concept, which by then had six locations in Houston and Austin, into the Benjy’s space. But anyone feeling too nostalgic about the switch should think again: “Benjy’s evolved every few years, so I view the change as part of the process,” says Levit, who has always prioritized seasonal and local at his restaurants. Most recently, he opened a speakeasy-style wine bar called Lees Den upstairs. “I am so appreciative of the team that continues to grow with us through the changes.” 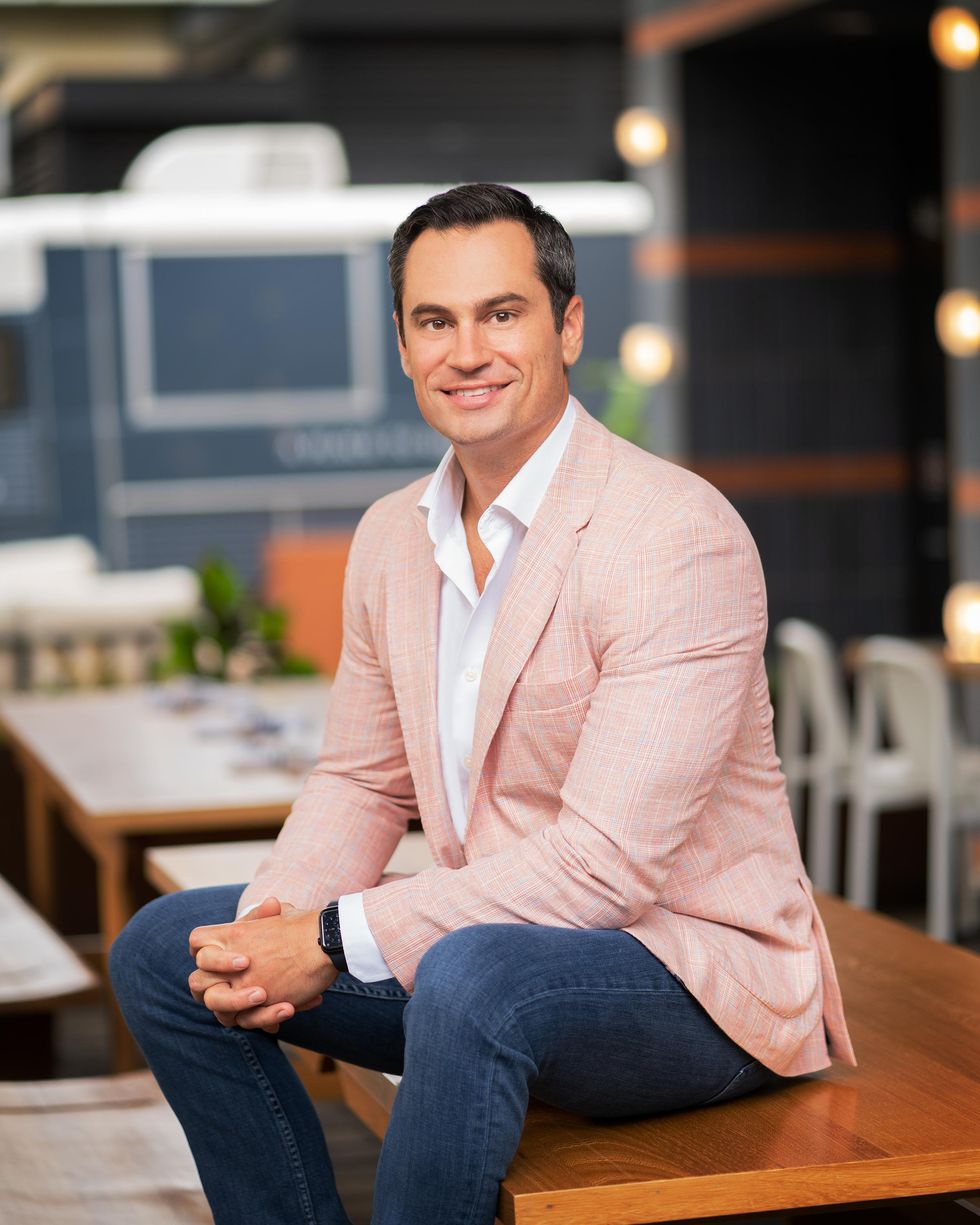 Lyons at Daily Gather in CityCentre, near where he lives with his wife and their three kids

In the early 2010s, the phrase “farm to table” was just becoming mainstream. Aaron Lyons, now 38, recalls that back then, locally sourced ingredients were really only on the menus at higher-end restaurants. “That didn’t make sense to me,” says Lyons, who opened the first Dish Society in 2014 and has since expanded the brand across Houston and opened another restaurant, Daily Gather, in CityCentre. He prioritized relationships with farmers and ranchers in ways that are now commonplace – thanks in part to restorers like Lyons. “Getting a front-row seat to sourcing and the supply chain has really opened my eyes,” he says, “and influenced the way I think about food, the economy, and society in general.”

Champions of the Arts 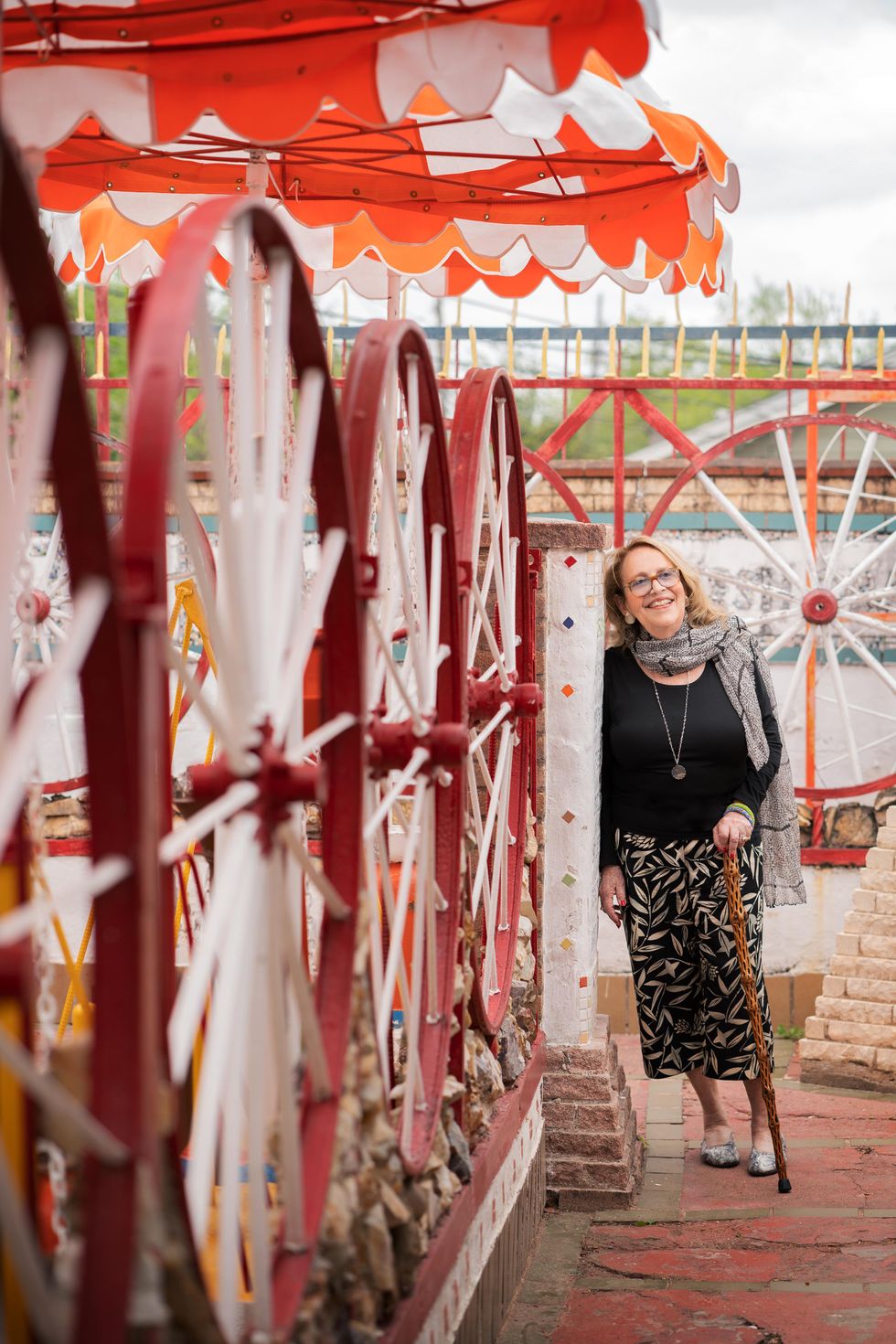 Oshman at the Orange Show Monument on the foundation’s East End campus, which will undergo a huge renovation and expansion over the next four years. She also supports the Menil, Parks Board and Baylor College of Medicine.

In 1975, as the board president of CAMH, Marilyn Oshman befriended mail carrier Jeff McKissack, who built a structure called The Orange Show by hand from discarded tiles and metals over the course of 20 years. The longtime arts patron and collector – she has, over the years, owned pieces by Jasper Johns and Frida Kahlo – knew it was special, and founded the Orange Show Center for Visionary Art to preserve his work and “celebrate the artist in everyone.” The foundation recently marked its 40th anniversary. Oshman, 83, is amazed by what the Orange Show, with the Art Car Parade, Beer Can House and Smither Park, has become. “When people come together to express themselves, the energy is magnetic.” 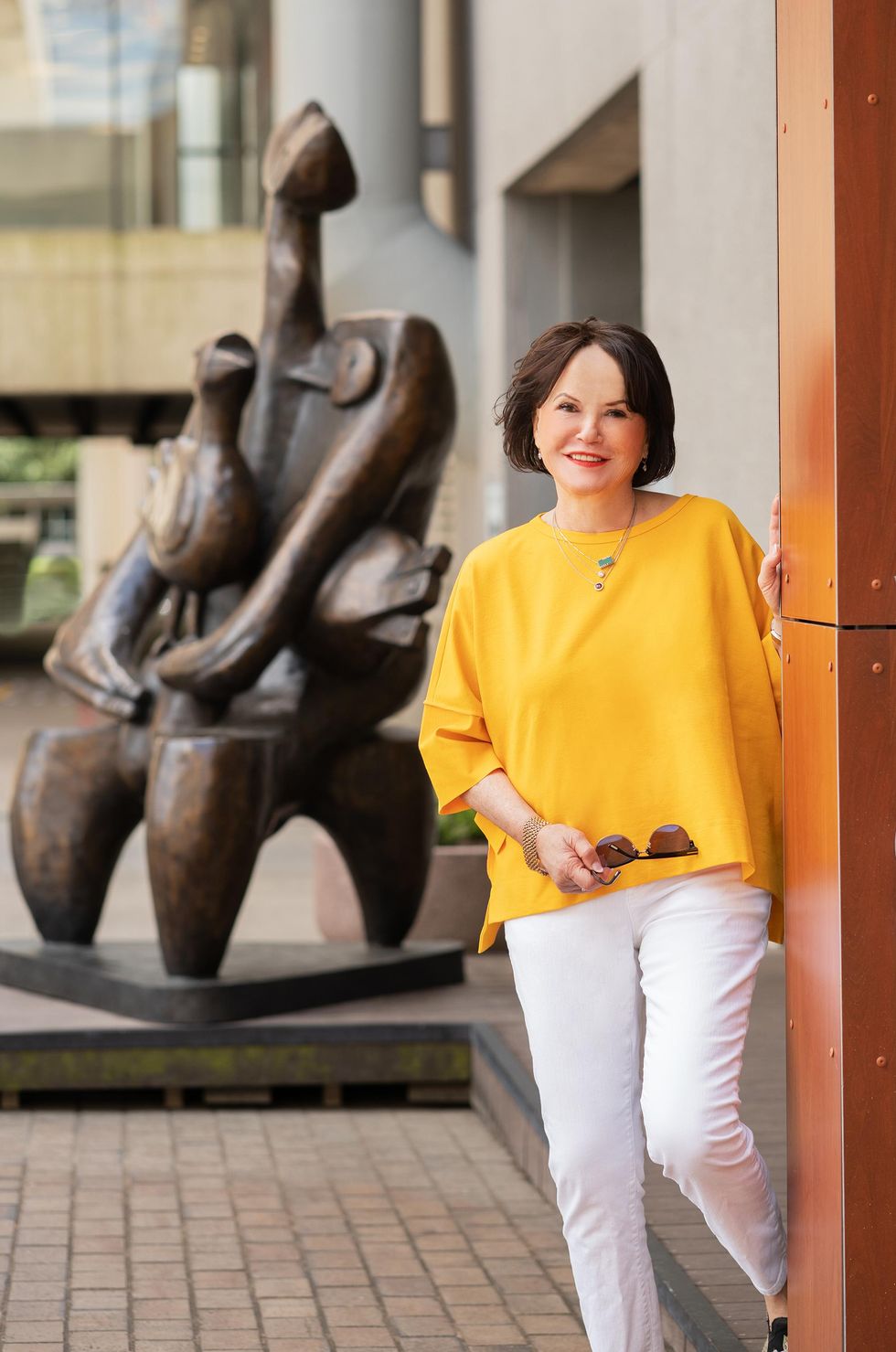 Sperber-Wasserberg at Off the Wall, a nearly 5,000-square-foot standalone space situated just outside the Galleria

Houston has grown rapidly in population and diversity in ways that both inform and reflect the city’s art scene – something Mimi Sperber-Wasserberg has seen first-hand since opening Off the Wall in 1978. Today, the list of names her gallery represents and sells reads like a who’s-who of contemporary artists: Norman Rockwell, Salvador Dali, Donald Sultan. This fall, British artist Mackenzie Thorpe unveils new works at Off the Wall, and Sperber-Wasserberg leads a group of collectors on an art-exploration trip to Paris. Long-term, a project she’s most excited about is the exhibition of works by Armenian-born artist Yuroz, “in honor of Jewish heritage and human rights,” she says. “Being a child of Holocaust survivors, this will be an important milestone in my career as a gallery owner.”